What is unconscious bias?

It is not a disease. and it can be cured;not with medicine but awareness. it will take a long time to eradicate it if ever, because it took a long time to create and sadly it is part of human nature  We see it everyday everywhere. Black lives matter and the protests have brought it to the forefront. 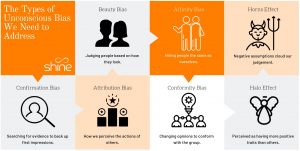 Our lives are based on perceptions not truths. Biases and stereotypes are so ingrained in people’s minds that it is not realistic to think a single training would result in significant reductions in bias. Just as with any change, there first needs to be awareness and an ongoing commitment to the change. This includes workshops, focus groups, dialogues, activities and a solid commitment to change.Step one in awareness; we all have prejudices and stereotypes based on our environment, and experiences.

We operate under assumptions and perceptions. We have always been taught to tell the truth and to look for the truth, BUT…what is truth????

Whenever I do a change management program or anything related to performance I discuss perception. I always start the class asking them to look at me then determine where I am from, describe my hobbies, tell me how I decorated my home, and what is my favorite color.. They usually think I am nuts to ask this.  About 1/2 way through the program when we are discussing perception in detail I ask them to answer the questions. Rarely are they right on any of it.

Think about people you have met at networking events or in business; what have you assumed.?

One of the most frequent times of seeing unconscious bias is an interview: jobs, proposals,opening a bank account, and any other occasion in which assumptions play a part

Many well-intentioned individuals are often influenced by their unconscious biases. Our unconscious biases come from direct experiences we’ve had with people, events, and situations as well as through indirect experiences learned through stories, books, media and culture.Because of our biases we may make some inappropriate or even bad selection choices .Research has shown that  many hiring decisions are made within the first five to ten minutes of an interview. These decisions are not made on whether or not the person is qualified or capable of performing the job. These decisions are made on first impressions. Referred to as social categorization, we routinely and quickly sort people into groups. The problem with this is that the categories we use to sort people are not necessarily logical, modern or at times legal. Some common biases that may occur in an interview include, stereotyping, the halo/pitchfork effect, nonverbal bias and the “like me” syndrome.

If you have these hidden biases, what can you do about it?

Be aware of your reactions and actions.  Take a step back and reflect on how you react to any of theses biases. Where do you get your information?  What activities do you do? How do you judge? 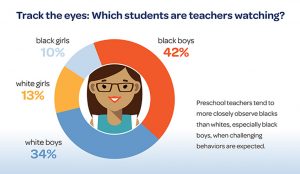 Aspire to make a difference.