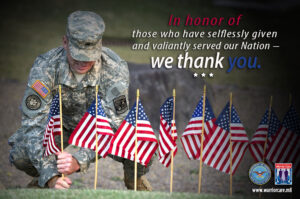 Monday is Memorial Day. May we never forget those who have given to protect our freedom

This sense of service to the fallen began when Gen. John Logan, commander of the Grand Army of the Republic, issued General Order Number 11.
The directive stated that “the 30th of May, 1868, is designated for the purpose of strewing with flowers, or otherwise decorating the graves of comrades who died in defense of their country during the late rebellion, and whose bodies now lie in almost every city, village and hamlet churchyard in the land.”

Legend has it that Logan selected the day only because it was not the anniversary of any Civil War battle. It was also warm enough all over to gather flowers to place on the graves.. Soon dubbed Decoration Day, future president James Garfield delivered the day’s inaugural speech at Arlington National Cemetery.  Close to 5,000 individuals listened and then decorated the final resting sites of over 15,000 Confederate and Union soldiers. “I am oppressed with a sense of impropriety of uttering words on this occasion,” Garfield began.“If silence is ever golden, it must be here beside the graves of fifteen thousand men, whose lives were more significant than speech ….”

That initial observance, and the many that followed, honored only those lost during the Civil War.  This changed, however, in the wake of the First World War when Americans began to honor the memory of all of the nation’s fallen. With this alteration came a change in name.  In 1968, Congress passed the Uniform Monday Holiday Act, which declared Memorial Day a federal holiday that was to be observed on the last Monday in May.

I realize That Memorial Day is a time of remembrance to acknowledge all those who gave their lives, but here’s my concern. What about the lives of those who came back but are dealing with visible and invisible injuries? I remember people I knew returning from Vietnam completely changed.  A dear friend’s brother was diagnosed with rare cancers due to agent orange.  Fortunately the VA has acknowledged this and is giving him  great care and he’s doing well.

Today I read It is estimated that over 50,000 servicemen and women have been physically injured in recent military conflicts; another 320,000 have experienced a traumatic brain injury while on deployment, and as many as 400,000 additional service members live with the invisible wounds of war, including combat-related stress, major depression, and post-traumatic stress disorder (PTSD).

I had a student in one of my classes at UCLA, Kevin Stevens, who was explaining the impact of PTSD and brain injury.  While he returned from his tours in one piece physically and is a firefighter he has to deal with the mental issues, and it takes a toll.

So many have sacrificed so much for us we need to remember them everyday not just on holidays.  That’s why I donate to veteran organizations.. Catholic Memorial HS students in West Roxbury, Massachusetts conduct funerals for homeless vets.  It’s great that they do that but no vet should be homeless or without a job or support.  They gave now it’s our turn. Let the men and women who have given for us know that we remember and need to be there for them.  There are so many great organizations from the disabled  or paralyzed vets to the top 10.

Show you care, not just Monday but always remember their sacrifice.