The History of Toilet Paper 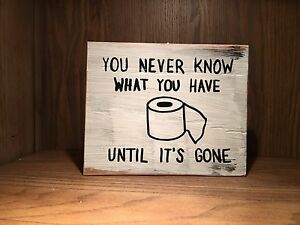 I know that you have always been curious, so now you’ll know.

Learn all about it

1. The first recorded use of toilet paper was in 6th Century China.
2. By the 14th Century, the Chinese government was mass-producing it.
3. Packaged toilet paper wasn’t sold in the United States until 1857.
4. Joseph Gayety, the man who introduced packaged TP to the U.S. had his name printed on every sheet.
5. Global toilet paper demand uses nearly 30,000 trees every day
6. That’s 10 million trees a year
7. It wasn’t until 1935 that a manufacturer was able to promise Splinter-Free Toilet Paper.
8. Seven percent of Americans admit to stealing rolls of toilet paper in hotels.
9. Americans use an average of 8.6 sheets of toilet paper per trip to the bathroom
10. The average roll has 333 sheets.
11. Historically, what you use to wipe depended on your income level.
12. In the middle ages they used something called a gompf stick which was just an actual stick used to scrape.
13. Wealthy Romans used wool soaked in rose water and French royalty used lace.
14. Other things that were used before toilet paper include: Hay, corn cobs, sticks, stones, sand, moss, hemp, wool, husks, fruit peels, ferns, sponges, seashells, knotted ropes, and broken pottery (ouch!).
15. 70-75% of the world still doesn’t use toilet paper because it is too expensive or there is not sufficient plumbing. 16. In many Western European countries, bidets are seen as more effective and preferable to toilet paper.
17. Coloured toilet paper was popular in the U.S. until the 1940s.
18. The reason toilet paper disintegrates so quickly when wet is that the fibers used to make it are very short.
19. On the International Space Station, they still use regular toilet paper but it has to be sealed in special containers and Compressed
20. During Desert Storm, the U.S. Army used toilet paper to camouflage their tanks.
21. In 1973 Johnny Carson caused a toilet paper shortage. He said as a joke that there was a shortage, which there wasn’t, until everyone believed him and ran out to buy up the supply. It took three weeks for some stores to get more stock.
22. There is a contest sponsored by Charmin to design and make wedding dresses out of toilet paper. The winner gets $2,000.
23.. There was a toilet paper museum in Wisconsin, The Madison Museum of Bathroom Tissue, but it closed in 2000.
24. The museum once had over 3,000 rolls of TP from places all over the world, including The Guggenheim, Ellis Island, and Graceland.
25. There is still a virtual toilet paper museum called Nobody’s Perfect.
26. In 1996, President Clinton passed a Toilet Paper Tax of 6 cents per roll, which is still in effect today. Obama tried to triple that but the House wouldn’t pass it.
27. The Pentagon uses, on average, 666 rolls of toilet paper per day.
28. The most expensive toilet paper in the world is from Portuguese brand Renova..
29. Renova is three-ply, perfumed, costs $3 per roll and comes in several colors including black, red, blue and green.
30. The CEO of Renova came up with the idea for black toilet paper while he was at a Cirque du Soleil show.
31. Beyonce uses only red Renova toilet paper.
32. Kris Jenner uses only the black Renova toilet paper.
33.  If you hang your toilet paper so you can pull it from the bottom, you’re considered more intelligent than someone who pulls it from the top. (Wonder how this was determined?)
34. Koji Suzuki, a Japanese horror novelist best known for writing The Ring, had an entire novel printed on a single roll of toilet paper.
35. The novel takes place in a public bathroom and the entire story runs approximately three feet long.
36. When asked what necessity they would bring to a desert island, 49% of people said toilet paper before food.
37. Queen Elizabeth II wipes her royal bottom with silk handkerchiefs. Wonder if the royal chambermaid gets to wash those??   Yeacht sure wouldnt want that job!
38.  Muslims wipe their bums with their bare hand— always the left hand . They eat with their right hand. If you are caught shop lifting, your right hand is  cut off forcing you to eat with your poopy left hand. Yeeeechdt! Yummy!
This history was sent to you using my right hand!
Have a nice day, and don’t forget to wipe this text clean