Advice from Winnie the Pooh and Friends 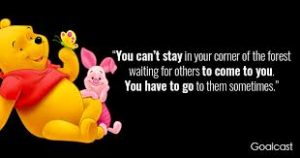 Last year I visited Winnipeg, Manitoba, Canada and learned the story of how Winnie the Pooh came to be. I encourage you to look it up.. Yes he was named after Winnipeg but the Pooh part came later. A. A. Milne provided a lot of sage advice that is still so relevant 100 years later.

I’d like to share a few of my favorites and hope they will resonate with you as well.  The quote in the picture aptly relates to networking.  How many people are afraid to make the first move or worse yet follow up.  If you don’t someone else will. I often hear I don’t want to bother them or if they really want my service or product they will find me. No they won’t.  People are busy, they forget.  Be top of mind.  Even if they don’t buy now they may refer you or buy later.  Check in with people. Send an e-mail related to something they may want.  Connect  them with someone that shares their hobbies.. Just say hello.

One of my favorites  is “You’re braver than you believe, stronger than you seem and smarter than you think.” we never know what we can accomplish until we take that first step. that’s the one the world is waiting for you to take.  As you look back over the last decade, what have you done you didn’t imagine you could?  How did you feel then and how do you feel about it now?  Hopefully proud of what you did.

“I must go forward where I have never been instead of backwards where I have” or “I always get to where I’m going by walking away from where I have been.” How often to we get stuck in what is comfortable and easy? Moving forward opens new opportunities connects with new people and helps each of us grow. “So perhaps the best thing to do is to stop writing introductions and get on with the book.” What projects do you have planned  for the new decade?  You laid out the plans maybe even started but haven’t finished.  It doesn’t just apply to books this applies to everything that makes us stuck. I have an accountability partner I have to answer to in terms of doing what I said I would.  It’s a huge help keeping me focused.  I have to have a damn good excuse or reason for not doing what I said i would.

“The hardest part is what to leave behind, … It’s time to let go!” What needs to be left behind to make room for the growth?  It’s the physical and the mental catharsis.Getting rid of excuses and the evil ya butts. I just clean ed out 2 boxes of old files, mostly personal It felt great.

At the end of the next decade what will be your proudest prouds and your greatest lessons?

“A little consideration, a little thought for others, makes all the difference.”
—Eeyore

“A day without a friend is like a pot without a single drop of honey left inside.”
—Winnie the Pooh

“It is more fun to talk with someone who doesn’t use long, difficult words but rather short, easy words like, ‘What about lunch?’”
—Winnie the Pooh

“If the person you are talking to doesn’t appear to be listening, be patient. It may simply be that he has a small piece of fluff in his ear.”
—Winnie the Pooh

“It never hurts to keep looking for sunshine.”
—Eeyore

“When you are a Bear of Very Little Brain, and you Think of Things, you find sometimes that a Thing which seemed very Thingish inside you is quite different when it gets out into the open and has other people looking at it.”
—Winnie the Pooh

“If the string breaks, then we try another piece of string.”
—Owl